In the age of Industry 4.0 & digital transformation of manufacturing, we look at benefits, use cases & trends..

Moreover, manufacturing isn’t just the clear leader in the Industrial Internet but it tops ALL industries (including the consumer IoT space) in the broader IoT reality. According to IDC data, published early 2017, the manufacturing industry was good for a total IoT spend of $178 billion in 2016, which is more than twice as much than the second largest vertical market (in IoT spend), transportation.

Manufacturing is poised to keep that first position across the globe until at least 2020, even if, as usual, in some geographies, this leading position is more outspoken.

The manufacturing industry is leading in the Internet of Things for various reasons: some are historical, others are related with the so-called next industrial revolution (Industry 4.0) and then there are the many uses cases and actual IoT deployments that offer rapid return and enable manufacturers to realize digital transformations from several perspectives: efficiency, automation, customer-centricity, competitive benefits and the advantages which are offered by using data across the manufacturing value chain and to tap into new revenue sources, a key aspect of digital transformation in manufacturing. 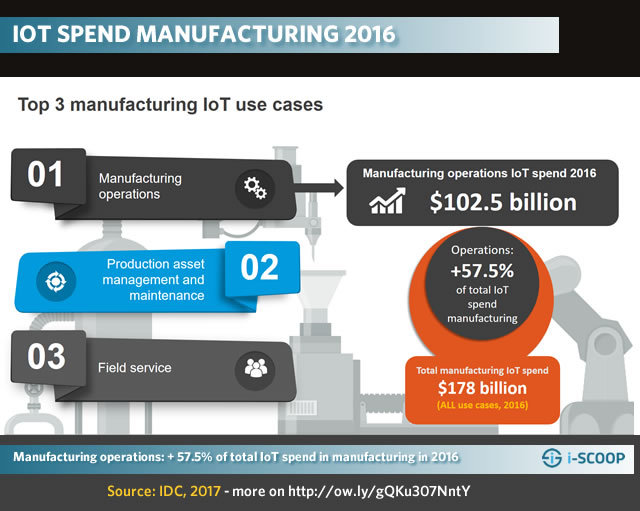 IoT use cases in manufacturing: opportunities and context

If we look at IoT in manufacturing from an IoT use case perspective (the areas where IoT is leveraged within a practical usage context), we see that one use case is sticking out: manufacturing operations, which is also the largest use case across all industries globally (the only region where manacturing operations aren’t the first use case is EMEA where freight monitoring comes first).

In 2016, manufacturing operations accounted for a total IoT spend of $102.5 billion (on the mentioned total of $178 billion), according to the same IDC 2017 release.

Manufacturing obviously covers many types of products, operations, processes and a vast space of activities, components, machines, people, partners, information systems and so forth. It is a long way from raw materials to finished goods and it is inevitably related with supply chains, logistics and transportation as well.

If we look at manufacturing as industrial production in any of the stages where raw materials are turned into products or products are used to build other products it’s clear that we see a huge market that is highly interconnected.

It’s among others in this sense that the Internet of Things almost by definition is key for the manufacturing industry in an integrated approach, further including technologies such as big data analytics, cloud, robotics and, most importantly perhaps, the integration of IT (Information Technology) and OT (Operational Technology).

In few other industries there are so many opportunities to leverage the Internet of Things in connecting physical and digital, making various assets, such as machines, other production assets and the various object in a non-production sense, as well as a variety of product and manufacturing process parameters part of a vast information network. This is an important element as with manufacturing we typically tend to think about goods and products but the bigger opportunity for manufacturers lies in cyber-physical systems, a service economy model and the information opportunity.

IoT use cases: the main areas

Part of them are to be seen in the context of the digital/connected factory, others refer more to facility and asset management and still others relate to components such as safety/security and operations/logistics/ecosystems. Last but not least there is the customer preference and behavior part.

Below is a list with several IoT use cases in manufacturing and their benefits/realities.

Manufacturing operations include the several elements which are typical in Manufacturing Operations Management (MOM), such as asset management, intelligent manufacturing, performance optimization and monitoring, planning, human machine interaction, end-to-end operational visibility and these cyber-physical systems as we know them from Industry 4.0. In fact, cyber-physical systems and the Internet of Things are twins in Industry 4.0.

IoT spending in this vast use case (or even set of use cases) is good for over 57 percent of all IoT manufacturing investments.

This is the second largest IoT use case in manufacturing and in reality also consists of a range of potential applications.

It includes production asset monitoring and tracking, from location to the monitoring of parameters in several areas such as quality, performance, potential damage or breakdowns, bottlenecks, the list goes on. On top of performance and optimization, there is of course also the dimension of maintenance (as a result and/or in a predictive way).

According to the mentioned IDC report, this is the third most important IoT use case in manufacturing.

Here we leave the factory or manufacturing facility and go directly to an important area where manufacturers are service providers. From product-related services to business-related services: the (field) service organizations of manufacturers are important drivers of growth and, obviously, of margin. It’s clear that information in the hyper-connected and hyper-aware digitized and IoT-enabled manufacturing ecosystem, along with the tools to plan, schedule and pro-actively service, are important differentiators.

In an updated forecast on IoT spending in June 2017, IDC predicts that manufacturing will reach $183 billion in 2017 from an IoT spending perspective. Production asset management spending would reach 45 billion.

Other manufacturing IoT use cases

Although the 3 mentioned areas account for the large majority of spending, there are several other manufacturing IoT use cases on levels of processes, assets and, let’s not forget, people.

Safety, security, worker protection (and productivity) and the many links between manufacturing in the strictest sense with connected services/operations/industries such as transport, supplier management and so forth all contribute to the vast IoT-related manufacturing solutions.

Last but not least there are the several related processes inside and outside the manufacturing facility. Production assets are one thing, activities such as preparing for shipment, packaging and quality control of manufactured goods another.

The key role of data in the smart manufacturing equation

Ultimately it all boils down to optimisation, digitization, visibility of the factory and manufacturing environment and its components in relationship with enhanced services towards customers in the broadest sense.

To a large degree manufacturing organizations hereby become service organizations and end-to-end transparency is crucial. The insights gained with an integrated IoT approach from the customer side are also crucial and enable to offer better products, quality and services.

And this brings us to the key role of data, in the end the major component needed to derive any form of value from sensors, IoT-enabled devices and other ‘things’, also in manufacturing.

What do manufacturers do with all the data they acquire regarding their assets but also regarding customers and the hundreds of millions of connecting devices they dispose of (according to Gartner analyst Jim Tully there were already 307 million installed IoT units in April 2015)?

They collect, measure and act on data from IoT devices in manufacturing as the PwC infographic below indicates. The infographic (it does date from 2015) also gives an overview of where manufacturers deploy IoT technology most: the manufacturing plant comes first, followed by respectively the warehouse, the extended supply chain and the customer (site, where traditionally the manufacturing services part is high).

When IDC released data on the IoT market in manufacturing operations in 2015, the mentioned drivers were efficiency optimization and “linking islands of automation”. And that requires an integration of processes and data, not in the least to also build islands of monetization and innovative transformation.

Visualizing the Internet of Things in manufacturing

To visualize the usage of the Internet of Things in manufacturing with an overview of the various mentioned places/contexts where IoT is leveraged in the manufacturing space, the graphic below from Microsoft offers a great overview.

As you can see it distinguishes between the manufacturing plant, global facility insight (beyond the factory), the customer site and global operations with the latter being divided into the goals and benefits for management, R&D and field service. 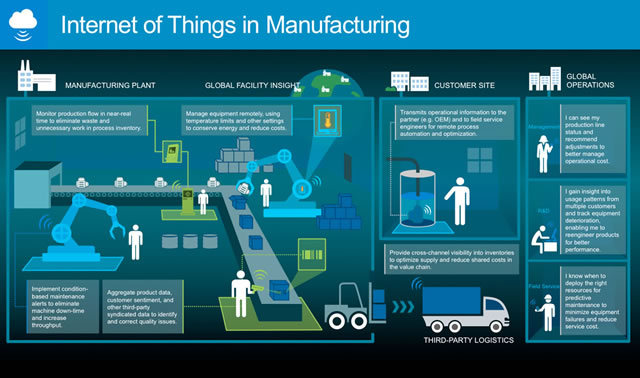 It also shows some additional or, let’s say, more detailed use cases and the benefits they offer, including:

- Remote equipment management, including setting specific limits and parameters to save energy and costs.

- An important one: the usage of various data (product, customer sentiment and more) as a driver of quality monitoring and enhancement in function of outcomes and this aggregated data.
Outside of the plant and actual manufacturing environment (insights and production) we see the transmission of operational information for those field service engineers on customer sites,
the overall value and supply chain perspective, third-party logistics and the global operations dimension.

Benefits of IoT in manufacturing

All the data and use cases previously mentioned already give a good idea of the benefits of the Internet of Things in manufacturing. Below are some additional data points on that IoT benefit dimension.

According to Verizon’s “State of the Market: Internet of Things 2016“,

- 76 percent of early-movers in manufacturing says IoT is increasing insight into customer preferences and behaviors.

- 60 percent of early-movers are improving the reliability or performance of products and services with IoT.

In March 2016, BI Intelligence estimated that global manufacturers will invest $70 billion on IoT solutions in 2020 (in 2015 they invested $29 billion, the report says). This is far lower than what IDC found but remember that the latter looks at hardware, software, services and connectivity.

BI Intelligence also looked at benefits though, mentioning research from TATA Consultancy, which indicates an average increase in revenues by 28.5 percent between 2013 and 2014 for manufacturers who have Internet of Things solutions.

Learn more about the Industrial Internet of Things in Manufacturing at Industrial IoT Europe and save €250 when registering before 31/07/18!

This article was originally sourced from i-Scoop

Please fill in your details below to receive regular updates from Qatalyst Global.

Make sure you keep up to date with future upcoming events by joining us on.

Please fill in your details below to download the brochure.

Please fill in your details to the form below to Interested in Sponsorship.

Please fill in your details below if you are interested in sponsorship: